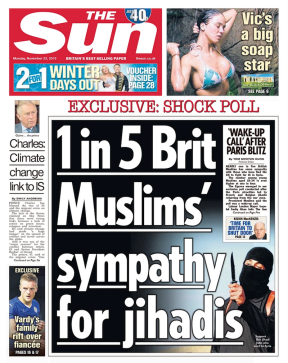 I do research for a living, most of it on British Muslims. It’s a great job. At its best, research is an art form, albeit an unglamorous one. You get to show people pictures that reveal to them something about how they live and the kind of people they live with. For researchers of British Muslims, though, the job comes with a major nuisance in the form of our news media and their incessant, awful polling. It is hard to convey the unique sense of annoyance engendered by their trumped-up claims built on the back of dubious evidence. I imagine it feels a little bit like being a musician whose heartfelt, hard-to-write, low key song gets turned into an awful cover version and then sent to number one for ten weeks by Simon Cowell’s latest X-Factor signing. Except while X-Factor, though irritating, is largely harmless, these polls are anything but.

The Sun’s front page splash yesterday about how ‘one in five British Muslims has sympathy for jihadis’ was as egregious a case as I have seen for a long time. Other people have done a good job of explaining what a travesty this claim was, so I shall try to keep my explanation short. First, it was based on the responses to a question that did not once mention jihadis or ISIS but ‘fighters in Syria’, meaning that it was prone to misinterpretation. Second, in the reporting of the research The Sun conflated sympathy for those travelling to Syria with support for ISIS’s insane aims and murderous methods.

Third, the newspaper failed to say anything about the wider, non-Muslim public, fourteen percent of whom, it transpired, also expressed similar sympathy for these ‘fighters’ when asked. (And why wouldn’t they, after all? Jesus managed to sympathise with those who crucified him without supporting their aims; much easier for us to sympathise with fifteen year-olds who have been seduced into journeying to Syria, even if their decisions were undoubtedly stupid and potentially deadly.) Fourth, it didn’t bother to mention findings from the same survey that seemed to undermine the central contention, such as, for example, the finding that only 3 per cent of Muslims feel it ‘is not important for British Muslims to integrate into British society’.

Fifth, and most irritating of all for research geeks, there was a glaring methodological flaw that could only be the result of sourcing research on the cheap. Survation, the polling company behind the research, identified respondents simply by calling people with Muslim-sounding names, which, as any researcher will tell you, creates a risk of systematic bias. A Muslim convert who has retained his Christian name, for example, will never be included in such a poll. Generally, researchers get around this problem by using pre-screened survey panels, but it seems The Sun was not willing to pay out for this.

I would risk my reputation if I made claims based on such utterly flawed research. Indeed, in a dystopian future in which I am king, these would all be capital offences for Crimes against Research Methodology. The Sun’s editors, of course, would be first up against the wall, followed by the polling company, Survation. (Although I concede I am not without sympathy for Survation.[i] Having worked in research consultancy, I know the pressure to win work. This is why, in my imaginary universe, I would offer a knighthood to YouGov, which, reportedly, declined to carry out the poll for methodological reasons.)

In response to a growing tide of criticism, The Sun today doubled down, claiming that their method was sound because it followed previous polls on the same subject. Plainly, this is a dubious claim. A course of action is not justified because it repeats previously made mistakes. The newspaper also claimed that the preceding questions in the survey made it clear that ‘sympathy’ in this question meant sympathy for ISIS. Again, this is bogus. Quantitative researchers know how sensitive surveys are to question wording. For example: Have you ever come across Gallup’s widely reported annual poll which is regularly used to claim that ‘forty per cent of US citizens believe in creationism’? It turns out that, by offering slightly expanded options, that forty per cent figure can be cut in half to twenty per cent.[ii] Small ambiguities can inflate results. Multiple ambiguities can inflate them massively.

Most frustratingly for people like me, The Sun painted anyone who disagreed with its take on its research as a ‘lefty’ in denial of the problem of Muslim support for Islamist militancy. I can’t speak for all those who disagree with The Sun, for we are many. But this does not represent most researchers of Islam and Muslims.

No-one who knows this subject well denies that even well-planned polls indicate pockets of support for radical Islamist revivalism, especially among the young. Yet those who do this for living also know that the narrative of a young Muslim fifth column is well wide of the mark. On the best evidence we have, what we actually see is something just a little bit baffling. Survey evidence shows – against the notion that young Muslims resolutely refuse to accommodate British cultural norms – that religious practice among young Muslims is noticeably lower than their parents, and inter-religious mixing is higher.[iii] In that respect, Muslims seem to be following the rest of the UK toward a more secularised way of life and  moving away from ‘segregated’ lives. This trend is often ignored, however, because this same group also adopts a confusing mix of religiously conservative and liberal positions. In polls, a larger proportion of young Muslims advocate ‘Sharia law’ than older Muslims.[iv] The same goes for advocacy of a global caliphate. The percentage of young Muslims offering such support approaches around thirty in some surveys. Yet young Muslims also tend to be more accepting than their parents of gay marriage, legal abortion, free mixing of genders and equality between sexes. Around three quarters of young Muslims support some form of legal protection for same-sex unions.[v]

What are we to make of this? The tabloids are generally inclined to take the statistics about ‘Sharia’ and run with them, ignoring contradictory evidence and questions about the complexity of religious interpretation. Some scholars, like Justin Gest and Clive Field, are sympathetic to the idea that Britain’s young Muslims are split between an increasingly liberal population and a small group who feel deeply alienated by wider British society. This is no doubt part of the truth, but I am not sure that it is all of it. What is interesting is that Islamic youth networks, some with Islamist leanings, have appealed to young Muslims partly because they have been more accommodating of women than traditional community institutions, as well as more participatory and internet savvy.[vi] To me, this hints that Muslims don’t just fall into neat groupings, but, rather, that liberal ideas can coexist with conservative and utopian ones, not always coherently. What emerges from the data we have on young Muslims is a picture of people who sometimes vocal and inclined to emphasise religious identity, without always being very observant. They are integrating, in the sense that their lifestyles are closer to the norm. But they are frustrated at what they are being asked to integrate into, and sometimes tend as a consequence to advocate oppositional identities. In extreme cases, these identities can, as we know, be dangerous.

The interpretation I am suggesting here can be challenged, of course. That is part of the art of carrying out and analysing social research. But this does not mean you can get into the art without training or awareness of ethical questions. Representation matters, and has consequences. Following the brutal murder of Lee Rigby in 2013, some forty-four mosques and Muslim institutions were attacked, these attacks ranging from arson, to graffiti to windows being smashed. How much easier is it to justify this when the perpetrator believes, when he pulls off a hijab or sticks a match through a letterbox, he has a one in five chance of scoring a ‘hit’. I don’t know if that makes The Sun’s article ‘hate speech’, as some have been protesting. It does, however, make its authors guilty of some pretty immense stupidity.

[i] This is partly because Survation has raised concerns about The Sun’s reporting. See here and, anonymously, here.

[ii] This claim is based on an unpublished report written by Professor Jonathan Hill. The change comes when participants are offered an additional response, ‘God both created and guided evolution’. Further details available on request.